In Tamilnadu, catamaran made up of 3-5 logs are in pattern and a specialized type made of 7 logs catamaran or kolamaram are used for catching flying fish. It’s termed as–Coromandel (AFO 2022)

Which among the following is the highest priority brackish water fish has high growth rate and can tolerate fluctuations in temperature?–Tiger Prawn (AFO 2022)

Which of the following fish has a lung as a labyrinth?–Gourami (AFO 2022)

The organism which can withstand a wider range of salinity is known as?- Euryhaline (AFO 2022)

Which of the following is bacterial infectious disease of fishery Disintegrating fins, blood on edges of fins, fin rays become brittle and lead to fin and tail rot – Red pest (AFO 2022)

Which of the following is organic in nature and is used in fish ponds is?–Cow dung (Nabard 2021)

In inland fisheries, which fish has been banned because of their predatory nature?–African catfish (Nabard 2021)

Which of the following is the name of indigenous major carp, which is also known to be the fastest growing among fin fishes? Catla Catla (Nabard 2021)

Inland resources of water in brackish water highest in which state? Odisha (BOM)

Among inland resources, the highest utilizable surface water among which of the following states–Godavari (BOM)

• Generally, a fishery is an entity engaged in raising or harvesting fish. Or it deals with all the aspects about harvesting or raising of fish.

• According to the FAO, a fishery is typically defined in terms of the “people involved, species or type of fish, area of water or seabed, method of fishing, class of boats, purpose of the activities or a combination of the foregoing features”.

• The definition often includes a combination of fish and fishers in a region, the latter fishing for similar species with similar gear types. A fishery may involve the capture of wild fish or raising fish through fish farming or aquaculture.

• Fishes are the first vertebrates with Jaws.

• They are cold-blooded animals that breath by means of gills, live in water and move with the help of fins. There are about 36,000 species, which represent 40% of the total vertebrate’s present.

• India has about 8118 Km. of coastal line and nearly 2 million Sq Km of Exclusive Economic Zone (EEZ) and half a million Sq Km. of Continental Shelf. From these marine resources, India has an estimated fisheries potential of 4.41 million tonnes.

Basic Morphological Features of a Fish

Fishes are cold-blooded vertebrates, and their body is suitable for the aquatic mode of life.

They are stream-lined bodies with few exceptions.

They have a combination of medium and paired fins.

Fins: Fins are useful for swimming and balancing. Fins are supported by rays known as fin rays Fins have both spiny and soft rays. Fins without fin rays are known as adipose fins (Mystus)

The body is covered by dermal scales, denticles or bony plates.

Gills are the chief respiratory organs.

Gill slits may be covered by operculum as in Teleost’s. The maximum numbers of gill are 7 pairs.

The adult kidney is mesonephric.

Paired nostrils are present, which normally do not open into the pharynx except in lung and lobefin fishes. 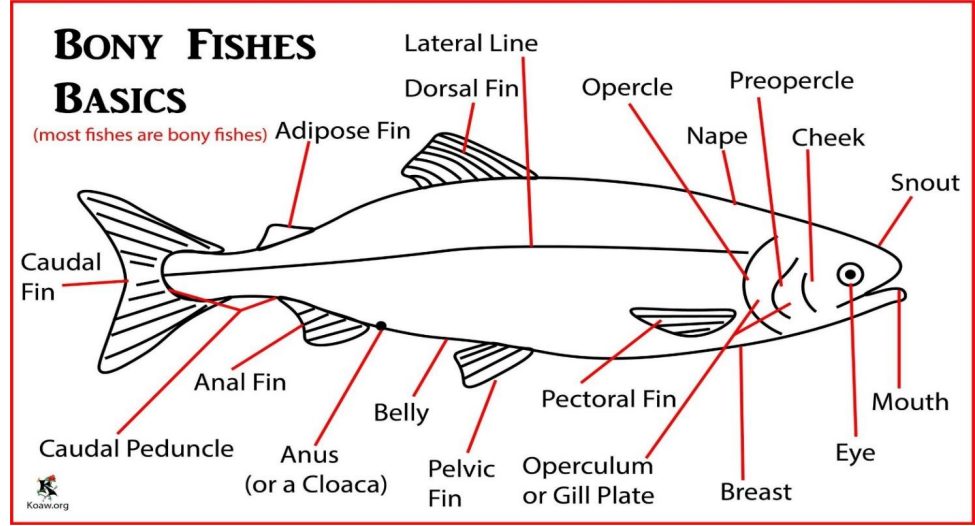 Ichthyology is the branch of science dealing with the study of fishes, with the study of commercial aspects of fishes, including the study of hydrobiology (Chemistry of water), limnology, behaviour of environment, population dynamics, (Craft) use of nets and gears, methods of fish catching and detection, study of pollution, aquaculture and breeding, etc.

The term ‘aquaculture’ covers all forms of cultivation of aquatic animals and plants in fresh, brackish- and saltwater.

Depending upon the management, fishery can be classified as under:

Capture fishery aims at the management and capture of fishes from the hill stream, rivers, lakes, estuaries and seas. Capture does not mean, over-harvesting. It is done with an eye to conservation of the fishes and other aquatic organisms, so that sustained productivity is maintained. This can be done by restricting the mesh size of the nets, so that smaller size fishes are not caught.

It includes the practice of rearing fishes in small impounded water such as ponds, jheels, small tanks, etc. Here important culturable fishes (endemic or exotic) are reared and bred on scientific lines and when they reach the desired length and weight, they are captured and marketed.

Depending upon the habitat of fishes, fishery may be divided into following:

• Capture fisheries in inland waters have long provided an important source of food for mankind and India has vast inland fishery resources.

• Although most fishing occurs at sea, in the marine environment, many smallerscale fisheries rely on inland bodies of water such as lakes and rivers.

We can broadly subdivide inland fishery into following:

• The Inland water bodies in India have been divided into five riverine systems and their tributaries extending to a length of about 29,000 km in the country –

• All these rivers, their tributaries, canals and irrigation channels have and area of roughly 13000 km.

• These water bodies harbour the original germplasm of one of the richest and diversified fish fauna of the world comprising 930 fish species belonging to 326 genera.

• The major river systems of India on the basis of drainage can be divided broadly into two major rivers systems.

• The man-made water bodies created by obstructing the surface flow or erecting a dam of any description, on a river, stream or any water course called reservoirs.

• Fish yield of these reservoirs, where the management is on the basis of culturebased fisheries is dependent on a number of parameters, such as growth rate, natural mortality and fishing mortality.

(iii) Estuaries:
• An estuary is defined as a semi-enclosed coastal body of water, which has a free connection with the open sea and within which the seawater is measurably diluted with the freshwater of land drainage.

• Plankton are key primary producers in estuaries. They move with the water bodies and can be flushed in and out with the tides. Their productivity is largely dependent upon the turbidity of the water.

• Two of the main challenges of estuarine life are the variability in salinity and sedimentation.

• Many species of fish and invertebrates have various methods to control or conform to the shifts in salt concentrations and are termed osmo-conformers and osmo-regulators.

• Osmo-conformers are organisms that live in the marine environment and thus have the ability to maintain the internal body osmotic pressure irrelevant to that of the external environment.

• Wetlands are dynamic aquatic ecosystems found all over the world. A wetland is an area of land that is saturated with water either permanently or seasonally.

• Wetlands are known as the earth’s ‘kidneys’ because, like your kidneys, they serve the very important function of filtering water. As water moves through a wetland, the sediments and pollutants ‘stick’ in the wetland, making the water cleaner. Wetlands also help reduce flooding and prevent shoreline erosion.

Wetlands may be natural or human-made. The only continent on Earth that does not contain natural wetlands is Antarctica.

• Wetlands may support both aquatic and terrestrial species.

• Human-made wetlands may be constructed for water management purposes in urban areas. What is unique about all wetlands is that they contain vegetation that is specially adapted to such wet conditions. Plants that live in wetlands must be quite tolerant of wet, productive soils.

Depending upon the type of wetland, there are two types of fishery techniques that can be followed depending on open or closed wetlands

➢ Flood plain wetlands retaining their riverine connection for a reasonably long period of time are relatively free from weeds.

➢ The management strategy can be that of capture fisheries.

➢ The approach is to allow natural fish recruitment by conserving and protecting the brooders and juveniles.

➢ This involves identification and protection of breeding grounds, brood stock and juveniles; allowing free migration of brooders and juveniles from wetland to river and vice versa.

➢ Closed floodplain wetlands, in majority of the cases, are characterized by weed infestation and derelict nature, constraining optimization of fish yield from these water bodies.

➢ Management of completely closed wetlands or those with a very brief period of connection with the rivers is more like that of culture-based fisheries of small reservoirs.

➢ The basic strategy for fish yield enhancement here is stocking and recapture.

➢ The growth of fishes in these water bodies will be faster compared to that of reservoirs due to availability of huge reserve of food niches.

➢ There are management systems, which combine the norms of capture/culturebased fisheries and culture fisheries.

➢ In this system, the marginal areas of wetlands are cordoned off for culture fishery either in ponds or in pens and the central portion (wetland proper) is left for capture fisheries.

➢ Under this system, a series of small enclosures are created along the periphery of the lake, which is leased out to entrepreneurs for fish farming.

➢ Some of these enclosures serve as nurseries to rear the seed for both aquaculture and stocking in the wetland.

➢ When culture-based fishery is practiced, the connecting channel is blocked using wire mesh to prevent the stocked fishes from escaping and the water inflow and out flow is regulated through a sluice installed at the mouth of the channel.

Species management is a very important tool in wetland fishery management. This can be achieved through various options of species enhancement. There are various species options.

➢ The main species are catla, rohu and mrigal.
➢ In the absence or low recruitment, stocking with these species is the best option.
➢ These are fast growing species and effective in utilizing the available food niches
➢ Species ratio and density need to be determined based on the strengths of fish food available, such as plankton, benthos, detritus, etc

Fishery One-liner Important For IBPS AFO  In Tamilnadu, catamaran made up of 3-5 logs are in pattern and a specialized type made of 7 logs catamaran or kolamaram are used …